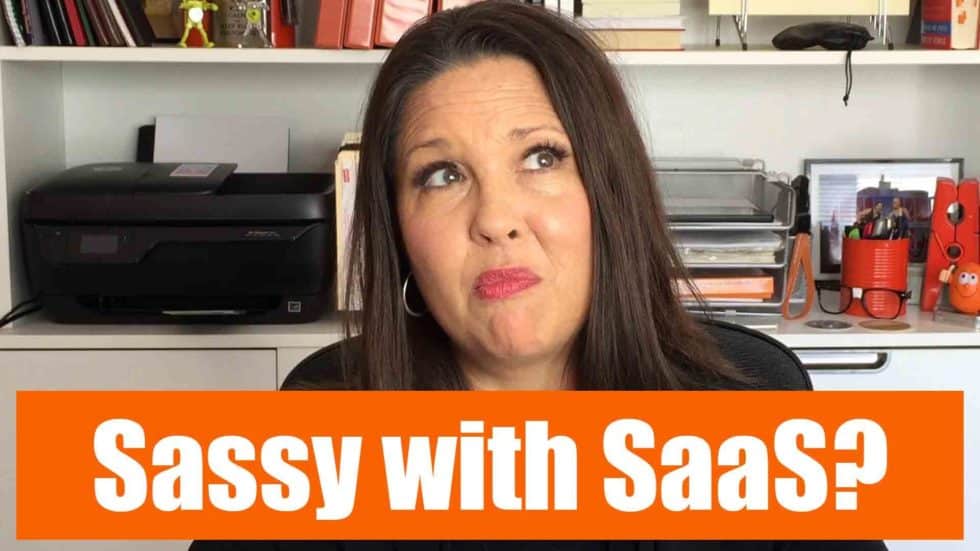 Saas in Digital Marketing – Talk Like a Marketer Series

This is part of our “Talk Like a Marketer” Series. Marketers (like any industry) throw around acronyms. This time we’re talking about Saas—Software as a Service.

Note: This includes my completely unofficial history about why SaaS came about. Feel free to leave a comment if I totally got it wrong.

In this week’s episode of Talk Like A Marketer, we are going to talk about SAAS. Not being sassy here, it’s called SAAS. Sometimes people will, I’ve heard people say it as S-A-A-S, but the short speak is SAAS, and what it stands for is, Software As A Service.

Let me tell you a little bit about the background on why we have SAAS platforms now. Back in the old days, which was like 15 years ago, you could buy a software program, and it came on a disc. I don’t know if I even have one anymore. It came on a disc, like a CD-Rom, or back in the really old days it was floppy disks. What you did is you pop that into your computer, and you’re able to download the software onto your computer. Not only that, you had this piece of … it was a physical object, your friend wanted that software, you can lend it over to a friend and unfortunately software companies were realizing that they were losing a ton of money.

First ones that really cracked down I think is Microsoft, because Windows started coming up with little numbers that they would only allow one license.

Secondly, was Adobe. They probably got the most ripped off. Them or AutoCAD software. I come from a drafting background. Never have I used unlicensed software, just saying. With Photoshop especially, it was out there. I think 20 years ago, that program was between $700.00 and $1,200.00, it was super expensive. As a student, students would pass the software around. But now what’s come about, because software is now sold as a service rather than trying to get that big number at the top or in the front end, now you pretty much are renting software on a monthly basis.

Some of the ones that I use would be BigCommerce, is my E-Commerce platform. I pay a monthly fee to be able to use their software, and Adobe. I’m part of the creative cloud. For instance if you need Photoshop, I think it’s like $10.00 a month, or they’ve got different packages all across the board depending on how many of their pieces of software that you want to use.

In the end, they’re still making money, but they’re making money from everybody so they don’t have to charge exorbitant fees. So now for Photoshop, for instance, I’m paying $120.00 a year and that software is always, always the most up-to-date, which is pretty cool.

That is SAAS and what it means, and you’re going to find that as you move forward with E-Commerce especially that your going to be using a lot of SAAS platform.

That’s our episode of Talk Like a Marketer this week. If you like this video, give it a thumbs up, and if you like what we’re doing here, please subscribe and that way you’ll be notified when I post new videos, which is at least every Wednesday with a few scattered in between.

So thanks so much for watching.