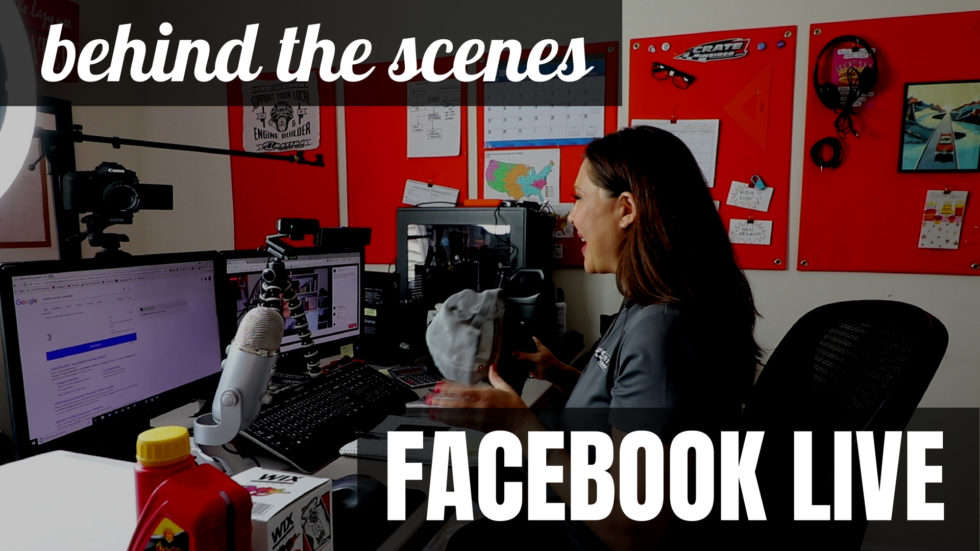 Facebook Live is a powerful way to promote your business. I take you behind the scenes of my popular Top 5 Tuesday show, watch the video below. I talk about the equipment I use. I also share some secrets for maximizing your exposure and engaging with your audience.

If you’d like to see how the show turns out, or if you would like to join in, I go live every Tuesday at 2:00 pm eastern at https://www.facebook.com/Crateinsider/

Today I’d like to take you behind the scenes to the most effective strategy I’ve used this year to promote my eCommerce business. For anybody who doesn’t know my main business, I sell race car parts for a living. I’ve been doing this since 2014. Now this year starting in January, I started to do something new.

I do a live video every Tuesday at 2 o’clock Eastern Time and I call it Top Five Tuesday. I’ll tell you, there are two reasons why I was doing it live.

It has really started to gain traction, and I want to tell you about a few of the different strategies that I use when I’m putting together these Top Five Tuesday videos. Now it always follows the same format.

I lead the video off with saying what I’m going to give away. I do a live giveaway during the show. I start off and I say, “All you need to do is leave a comment. You can ask a question. You can say hi or leave an emoticon, whatever.”

Obviously, the comments are better for the video because then Facebook will show it to more people because it has so many comments. But the idea is I want to know who’s there and who wants to be known that they’re there.

How to Keep Your Audience

I don’t want to call somebody out just because I see that they’re watching live. Well, at the very end of my video, I want them to stay until the end, so at the end, I use a random number generator to generate a random number based on the number of comments and then I give away something for free. A lot of times it’s logo gear. Well, like this week is going to be a hat, one of my logo’d hat. That’s great. It’s a win-win because my logo gets out there.

It’s also been great because I do have advertisers on my site. I work with manufacturers and it’s given them an opportunity to send me gear that I can then give away to my audience.

It also gives me something to talk about. I can talk about their products or their company. It really becomes this win-win team effort between … It accomplishes all of the goals that I’ve ever set out to do and that is to put together the people, the products and the information and put it all together into one package. That’s what I try to do.

I lead it off with talking about my giveaway. Then I normally have some type of featured item. It could be a video that I put out either the … It’s sometime in between this video and the previous one. I will talk about any videos that I’ve posted. Most of my videos are going to talk about products.

The Main Section: Top Five Products of the Week

I mean sometimes it’s just informational, but I bring that to people’s attention so that they’re aware of those items. Then I talk about the top five products of the week.

Sometimes I’ll do a little demo with different things and maybe answering questions. It’s a really flexible format, but at the same time, it’s a format that is recognizable and very easy to do and replicate week after week without necessarily being boring.

I guess I’ll tell you a little bit about my setup. It’s gotten a little more complicated… Obviously, when I started doing video, I shot them all … Well, I’ve got iPhone 8’s now, but I started with a 4, and then I went to a 5 and then a 6 and then now 8s, but start with what you’ve got. My setup at this moment is … Let me just go ahead and I’ll take you there.

Over here at my computer, I will have … I like to use my Joby Gorillapod right here, and I look to set it up high, which I know it’s probably a little bit odd, but I set it up higher.

This is a brand new edition to my setup. This is a Yeti Microphone. I wasn’t loving … I mean truthfully a phone would have done a better job than my webcam, but it is harder for me to see the comments. It’s just harder for me to interact with my people.

What’s perfect about this setup it’s … I’m just going to tell you. I am not in love with the webcam. Don’t feel like you have to get a webcam. You’re going to be better off honestly with a phone, but I need to be able to see the comments. I just wasn’t able to see them the way I wanted to with using a phone, so that’s why I’m doing it that way.

I’m not happy with the sound from the webcam, so I just bought a microphone. I’ll just be honest, I’m kind of a junkie when it comes to gear. Just the way it goes.

I would also like to introduce you to my super best friend because right now there’s no … My office here, this is my office, and we face a window. Let me show you that. We do face a window, but I can never tell you if we’re going to have a rainy day or a sunny day or whatever. I am 40 something and so I don’t like my wrinkles to show.

Let me introduce you to my best friend and that best friend is right here (Ring light: NEEWAR 18″ LED) because watch this. Oh, look. Well, now it’s a little odd because it’s trying to adjust.

I do have just auto focus on this camera, but it does, especially when I’m facing the light, it will just brighten up everything, make my teeth whiter, make my wrinkles go away. I love it for that. That is my best friend, my little secret weapon.

That’s a little bit of the behind the scenes, and then I’ll just run this camera while I’m doing my video, so you can kind of see … I’ll probably just fast forward this part so you get to see it in action.

Hey, everybody. It’s Tuesday and it’s two o’clock, so that means it is time for Top Five Tuesday….

Now there’s one other major advantage of using Facebook Live and it’s because Facebook LOVES live video. Actually, if you’ve been on Facebook, you’ve probably seen where you get a pop up that’s such and such a person is live. It also means it gets served to more people.

It really is a challenge these days with Facebook Pages to be seen by the people, even the people who like your page. If you’re really looking for a strategy for reaching more people, then Facebook Live is a fantastic way to go.

What’s great is after the video is done, it’s really easy to download that video, then you can put it onto YouTube.

These are some of the things that I do, and then I also end up emailing the information out to my customers.

Of course, that’s feeding back to the YouTube video. Although it is possible now to embed Facebook videos in places, it’s just a step that I’ve never taken. It’s one that I just do the YouTube.

This gives you a general idea where I’m talking about the different race car parts and giving information to the audience. There we go. That is my weekly Top Five Tuesday video. I hope you enjoyed this.

I hope this gave you some ideas that you can use in your business, and I guess there’s one thing I didn’t mention is that this is all I’m working with right there. That’s what I got. That is my Top Five Tuesday, what I’m giving away, the couple things I’m featuring, and my top five and the prices.

I have no problem with like looking down while I’m doing my video because people don’t expect me to have all this memorized, so it’s totally fine.

It’s fine to be natural and real. I feel like that creates a much better connection with my customers.

I hope these suggestions help you and get you motivated to do your own live video.